So today would have been my aunt Donna’s birthday.

We lost her to pancreatic cancer last year on what was the saddest Christmas ever.

Donna was my godmother, and she was the awesomest kind of badass woman you could imagine: a tiny, feisty little Italian lady who was smart, motivated, ridiculously organized, and full of energy and compassion.

She was a role model to many, including me.

Some of her life I only know from stories I’ve heard from my family and Donna herself. But I hope to share my remembrance of her as best I can, even if the details aren’t exact. Starting waaaaaay back during a groovier time… 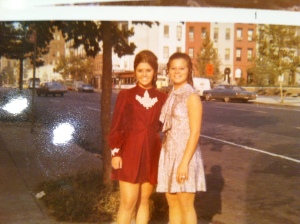 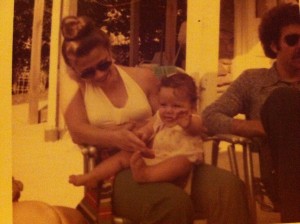 Oh yes, that adorable little baby is yours truly.

Of the three Bigna girls (my mom and her two sisters), Donna was a typical oldest child. She was the responsible one. The one who did all the dishes while my mother hid in the bathroom. The one who got the best grades and went to college. The one who argued passionately with my grandfather about the social justice issues of the time. The one who married the right guy–my Uncle Bruce.

Now, I moved around a lot as a kid. We moved to FL for awhile when I was 5, and then my brother and I came back up to CT to live with our dad when I was in fourth grade.

Once we were back in the same state, we saw my aunt and her family every year around Christmas. My cousin Ryan was an only child and therefore–I believe–got better toys than my brother and I. So we played hours of Coleco over there…but I digress.

There was also wine involved, as evident from all our red cheeks.

Now me, I love an adventure. A new challenge. I’m always looking for the next thing, and I have a related habit of letting go of things too quickly. From my aunt, I learned about the importance of tradition. Of laying down roots, keeping commitments, and being a person that people can rely on. I’m so grateful.

And you could always rely on Donna. When my daughter Emma was gravely ill and we were in the Yale PICU for two weeks, Donna called every day, at the same time: “Just me, honey. Checking in.” Her voice became such a comfort to me, and in her last few months, I made a commitment to her and myself that she would hear from me, every day. While I wasn’t able to call or text her at exactly the same time every day, I honored that commitment and I think–I hope!–it comforted her in some small way.

Donna was full of both passion and compassion. She was an amazing combination of kindness and serious Sicilian attitude.

From her, I learned to stop giving up so much of myself, to instead say “enough” or “that’s all I can do.” I thought I was being giving, but I was really making myself disappear.

My aunt taught me about boundaries, where to draw the line to preserve myself and my own family instead of spreading myself too thin just to try and please others. Which happens to be a very, very bad habit of mine…but I am working on it, thanks to her.

Donna didn’t take any shit. There were schedules, people. There were lists. You followed the goddamned schedule, you kept things moving, or woe to you. You’d be at the business end of Donna’s ire, or, more likely, just left behind as she briskly went on with the plans. Your loss.

My aunt listened. It didn’t matter that some years we only got together two or three times. She listened to my marital problems, my struggles helping my dad through two recurrences of brain cancer, my trials and tribulations with my career, and my mom victories and complaints.

She gave great advice. Sometimes it wasn’t what I wanted to hear, but it was what I needed to hear, and she (usually) delivered her pearls of wisdom with firm kindness. Because–duh!–she was always right.

I am a better woman for having heard and internalized all she’s ever taught me.

My badass aunt is most assuredly running a very tight ship up there in Heaven, but down here, she is missed every day, by so many.