But it’s not just the summer I feel slipping away from me; it’s so much more.

Emma turned twelve just over a week ago. We’ve decided that at 12 she’s allowed to wear makeup. She’s also switched from glasses to contacts recently, and a few days before her birthday, I taught her how to shave her legs.

And don’t even get me started on this one…this no-longer-a-boy. This nearly-a-man who will be a junior in high school this year, who we are teaching to drive, and who has two college visits set up in the fall.

I sometimes get incredibly irritated with him when he has been sitting at the computer with those infernal headphones on while playing Overwatch for, LITERALLY, hours. He “doesn’t hear me” when I ask him to help empty the dishwasher, feed the dog, or take out the trash.

But then at other times I stop and think that in two years, just two short, precious years, we’ll be sending him off to college. Watching him go and taking my heart with him.

And he is kind, and hilarious, and good-hearted, and smart, and generous, and, yes (when he “hears” me), willing to help out around the house. If the worst thing about him is that he plays video games too much, I think we’re not in too bad a spot.

And as for her, she is still the same mix of sweetness and sass that she’s always been, smart, compassionate, and by turns sensitive and tough-as-nails. But she’s looking so grown up these days. I have lots of adults tell me that she is mature beyond her years, and I do believe it’s true that my Emma is an old soul.

She still has a lot of physical growing to do, as she is still the height of about a 9 year old. I mean let’s face it, our whole family is short so it’s not like she has much of a shot at being taller than average (if that)…but I think for a while now her height has tricked me into thinking I have more time.

With her I have just six years left, and if the rapidity with which her brother has grown up is any indicator, that six years will slip through my fingers probably more quickly than this summer of driving them to all the places to do all the things. 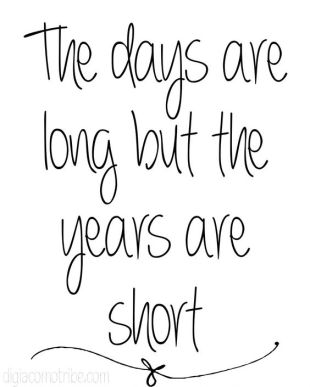 Days do feel long. With work, and making sure everyone has all their stuff, and running around doing errands, and the driving of the kids to the places, and the general doing of all the things, the days are long. (Except vacation days. Those are always super short, as we all know.)

But then suddenly I turned around and it’s more than halfway through 2018 and I realize that the long days of the doing of the things has brought me to this place where they are nearly grown. They don’t need me as much, but in some ways they need me more than ever and just don’t want to show it.

They are so big, and my heart breaks thinking of all the little ways that I am forced to let them go every day. That’s what it is, really. It’s a slow process of letting them go, and it happens so subtly sometimes that you don’t feel it until  suddenly you realize that, dear God, one is driving and the other is wearing makeup and shaving her legs and how the hell did this even happen?

I love those kids so much that it is painful sometimes. Drew and I have worked hard as parents to raise them to be good people, and I think we have done a decent job (barring the usual parenting screw-ups).

But here is what I call the Great Paradox of Parenting. We are “raising” these kids. Growing them. Putting all this work and love in so that they can become adults and leave us as they go off into their own lives. I know that’s the point of parenting but it hurts my heart so much to see it happening. To watch them slip away slowly and quickly at the same time.

I know they will never really be “gone.” They’ll always love us and we’ll always be a big part of their lives. But the day to day togetherness–no matter how much technology allows us to keep in touch via text or FaceTime–will no longer be there. They won’t be with me every day, needing to be driven to all the places for all the things.

This, this is the part that makes me feel like a super sticky bandage is being slowly and painfully ripped off.

I try to enjoy every stage of their lives and I have to say, for the most part, I am really loving this pre-teen/teen phase with both of them. But it’s so close to the end that it makes me want to hold on tight.

Of course I’ll let them go…I already am little by little. They’ll both grow into amazing adults doing good things in the world and I’ll still be so proud to call them mine.

And I’ve already told them both that they’ll have a tough time getting rid of me anyway, so there’s that.

In the meantime, I’ll try to let go gracefully, knowing they won’t always listen, that they’ll make their own mistakes and have their own victories…some of which I may never even know about. And that’s ok, because that’s all part of the rollercoaster journey of parenting.